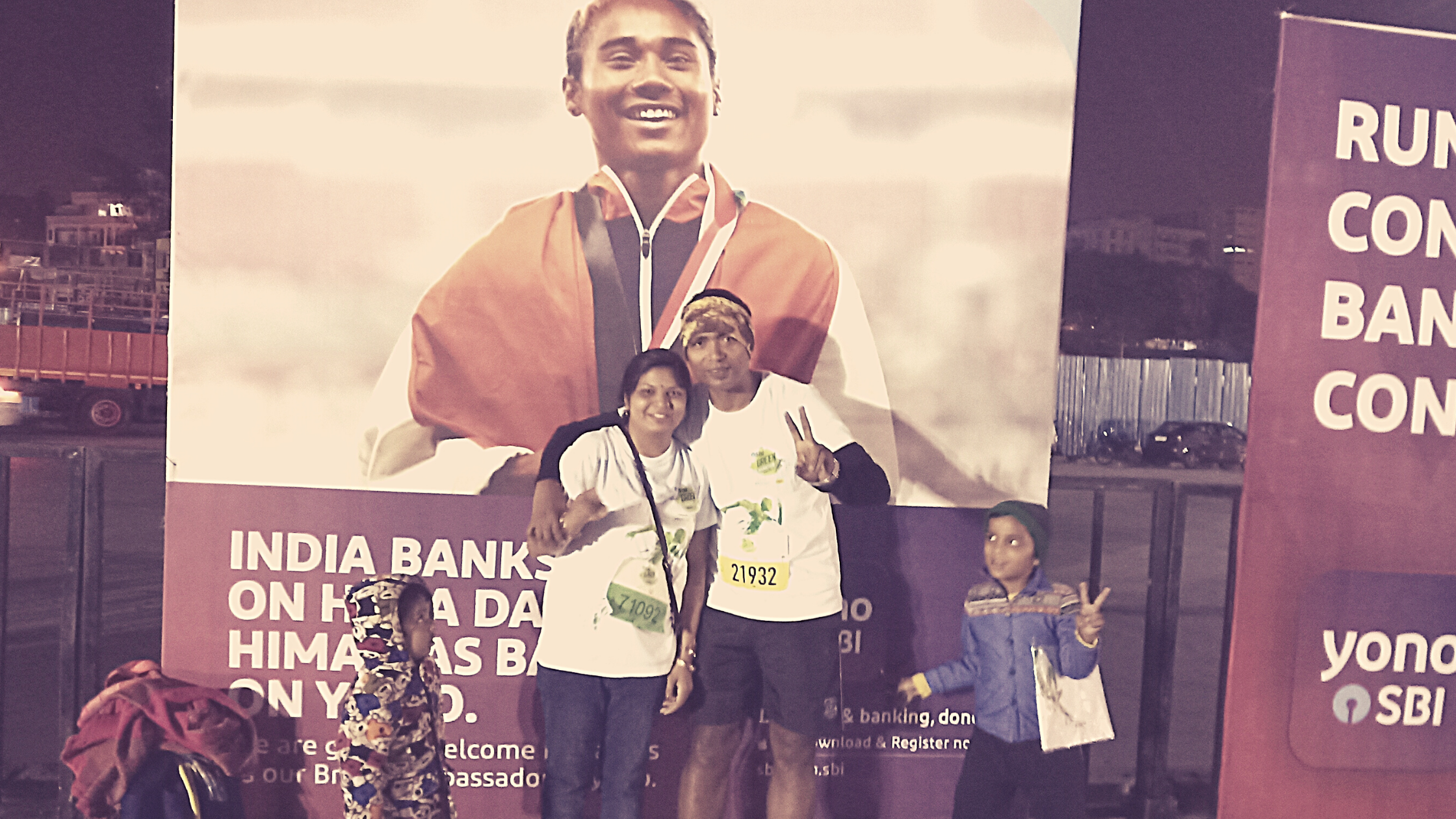 This is the post about my first ever marathon.

I never ever dreamt that I would be doing this.  All at the age of 40.

Lots of things change in our lives when we are clear about bringing them in.  My quest to turn myself into a fit guy got me started.  I started to run 10 months before the event.

When I started, I had no idea about any running event whatsoever.  All I knew was that Running can cause fat loss and make me lighter.  I was then weighing about 96 kgs. And so, running sounded like a good option.

I was not too sure about what he was talking.  So, I browsed through the net.  And Alas!  I was in for a shock.  Yes! he was right. I was able to find a website dedicated to the cause of running events through out the year.

I picked one.  This was on 5th Nov 2018.  It was in Bangalore.  I live a 2 days train journey away from the city. But I just filled the form and registered myself for the half marathon.  I had not done a half marathon but that was the most challenging run I found on the menu.

I had to pay for the running. And It was not just a token amount. Paying to run. Hahaha..It might sound like a crazy idea. Having run half a dozen marathon, I now understand the logic behind it. Taking the pains to run and sweating and paying on top of that.  Every new runner would think so!

After all the hiccups in the plans to reach the venue on 2nd December, I did make it.  I went with the whole family.  I am glad I did that.  My family’s support was the best thing that I witnessed.  I never knew that my wife would come forward and get the small kids just to see me run for no reason.  But, she knows me and understands my feelings, I guess!!

THE DAY OF THE RUN

So, got up at 3 am on the D day.  In fact, I did not get the proper sleep last night.  The anxiety was there.  I had never run 21 K so far in my life.  Never.  It was the first time ever.  I was not sure if I would be able to cross the finish line.  I was anxious about the failures.  What if I failed to do so.  What if I just fell flat before the finish line.

With all the fears chasing me, I still chose to chase my run.  My dream to be something worthy.  No matter at this age.  Just to have the support on the run, I had called my cousin.  He is a Brave young officer with Indian Coast Gu .  He is a sports man.  I thought that he might be of use to me if something happened while I ran.

And he gladly joined.  He is a keen sports person.  Sports make you respectable in the eyes of others.  I have seen that respect grow in the ensuing times since then.

So, the run was supposed to start at 5:30 am.  It was cold and my kids were sleepy.  But, they were all there.  This was my biggest delight of the event.  So, me and my cousin changed into running t-shirt and put on our race Bibs.  We had to remove the heavy and warm clothing.

But we soon started to feel good with the music and the people dancing to the tunes for the nice warm up.  Sharp 5:30 a.m., we lined up at the start line waiting with hyper alert ear to hear the gunshot. I set my mobile app for the run quickly and pressed the button the moment I heard the gun shot to – RUN.

When the race started it was still dark.  So, the glamour of lights was left behind after a few kilometres.  In the very first few minutes of my run, I had charted out my strategy for the run. Run slow.  I had set my goal and my plan.  My target was to survive the course of the run.

After every Kilometre, there was a distance marker.  It was a joyous feeling crossing each of them one after the other.  At the 5th mark, I looked up at my watch and found that I was doing NOT BAD.  By 35th minute, I was crossing the 5th Kilometre.  By 10th mark, I was running for more than an hour.  And at ever few kilometres, I would hear the beep sound of the race tracker in the Bib. The beep still resonates in my mind to date.

My strategy not to give into the excitement of the fellow runners helped.  I had a very clear idea that I will run my race my way.  It was not a competition with the world outside.

I was pitted against my own self.  I was here to defeat no one else but my own self – my old self.  It was a fight to tell the old lazy bum that you gotta get kicked out today.  And the resolve was firm.

By the 15th Km mark, my cousin started to feel the fatigue.  I was surprisingly fresh and strong.  I shared the pain relief balm for my own legs when my cousin sought the help.  He was now starting to slow down.  I was not.  I was looking for the finish line.

So, at the 16th Km, I knew now that another 5 kms would not be killing me.  So, I just asked my cousin to take his time and come. And I started to push myself with full force.  I was now looking at the bright morning sun beaming its rays on me.  It felt magical approaching the finish line.

And I did my first ever half-marathon in 2hrs 17 minutes.  That day, I lost my old self and old identity to discover a new me – THE RUNNER!

5 thoughts on “RUNNING YOUR FIRST MARATHON IS LIKE YOUR FIRST DATE: MY STORY”